Network engineers routinely need to validate configuration settings of various devices in their network. In a multi-vendor network, this validation can be hard and few tools exist today to enable this basic task. However, the vendor-independent models of Batfish and its querying mechanisms make such validation almost trivial.

Check out a video demo of this notebook here.

Initializing our Network and Snapshot¶

SNAPSHOT_PATH below can be updated to point to a custom snapshot directory, see the Batfish instructions for how to package data for analysis. More example networks are available in the networks folder of the Batfish repository.

The network snapshot that we initialized above is illustrated below. You can download/view devices’ configuration files here. We will focus on the validation for the six border routers. 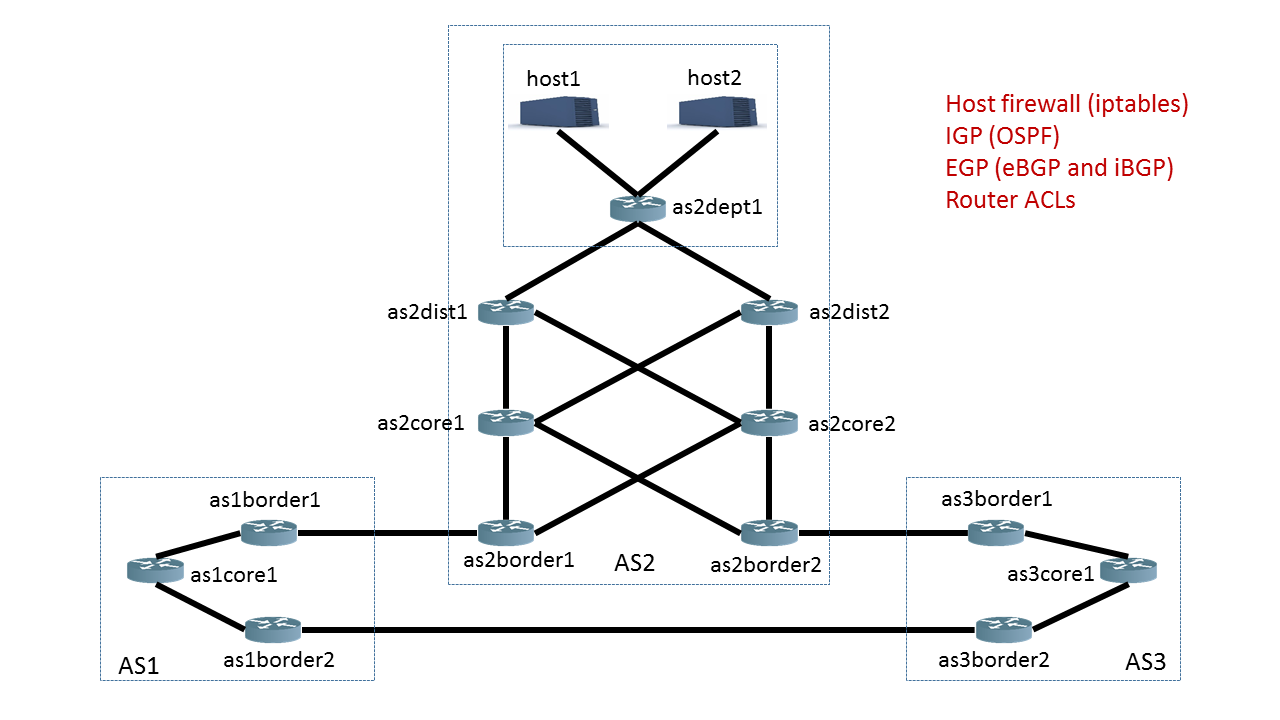 This can be done using the nodeProperties() question.

The .frame() function call above returns a Pandas data frame that contains the answer.

We demonstrate each scenario below.

Validation scenario 1: Every node has at least one NTP server configured¶

Now that we have the list of NTP servers, let’s check if at least one server is configured on the border routers. We accomplish that by using (lambda expressions) to identify nodes where the list is empty.

Validation scenario 2: Every node has at least one NTP server configured from the reference set.¶

Because as1border1 has no configured NTP servers, it clearly violates our assertion, and so does as2border2 which has a configured server but not one that is present in the reference set.

Validation scenario 3: Every node has the reference set of NTP servers configured¶

A common use case for validating NTP servers involves checking that the set of NTP servers exactly matches a desired reference set. Such validation is quite straightforward as well.

As we can see, all border nodes violate this condition.

A slightly advanced version of pandas filtering can also show us which configured NTP servers are missing or extra (compared to the reference set) at each node.

Validation scenario 4: Every node has NTP servers that match those in a per-node database.¶

Every node should match its reference set of NTP Servers which may be stored in an external database. This check enables easy validation of configuration settings that differ acorss nodes.

We assume data from the database is fetched in the following format, where node names are dictionary keys and specific properties are defined in a property-keyed dictionary per node.

Note that there is an extra property in this dictionary that we don’t care about comparing right now: dns-server. We will filter out this property below, before comparing the data from Batfish to that in the database.

For example interfaceProperties() question can be used to fetch properties like interface MTU using a simple command.

Get involved with the Batfish community!¶

Start interacting through Slack or GitHub to know more. We would love to talk with you about Batfish or your Network!